Month to month Rentals - From R499 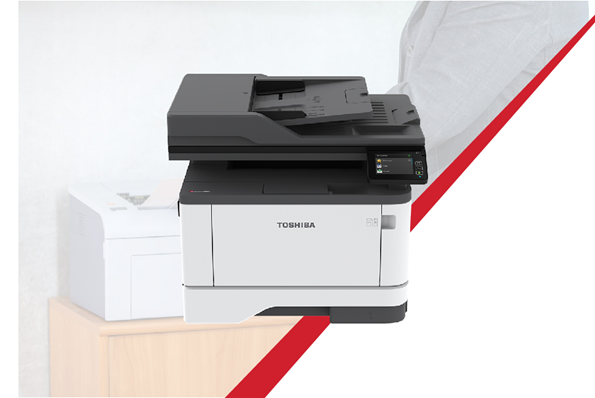 Toshiba Tech SA announced the release of the new 42ppm e-STUDIO409S A4 B&W MFP. The model serves as a net new configuration, expanding Toshiba’s A4 monochrome segment down the market to a new speed. The addition is designed to provide Toshiba’s direct reps and dealer partners with an entry-level desktop unit at an affordable price point. The strategy represents Toshiba’s efforts to better support home office environments and offices with decentralized print needs. The launch also marks a notable milestone in Toshiba’s A4 portfolio evolution and an incremental step in strengthening its limited A4 B&W offering.

The release of the 42ppm e-STUDIO409S expands the low-end of Toshiba’s A4 monochrome line-up, doubling the assortment from one to two configurations.

The model will serve as the only MFP within Toshiba’s offering, enabling the vendor and its partners to capture net new revenue opportunities in the entry-level segment among customers that have price and space constraints, as well as low-volume and B&W-only output requirements. In comparison to the vendor’s other A4 e-STUDIO MFPs, the new model is primarily positioned as a compact desktop MFP option that supports the remote workforce, while providing increased price and feature flexibility within this portion of Toshiba’s line-up.

As mentioned above, the new e-STUDIO409S is primarily differentiated from Toshiba’s existing A4 e- STUDIO models by its compact footprint, entry-level feature set, and budget-friendly price point. The model does, however, mark a continuation of Toshiba’s technology partnership with Lexmark with the vendor serving as the engine provider for the e-STUDIO409S, as well as Toshiba’s e-STUDIO478S A4 B&W MFP and the 40/50ppm e-STUDIO389CS/479CS series A4 colour MFPs.

Compared to competing OEM portfolios, Toshiba’s new e-STUDIO409S has a unique competitive advantage based on the price and feature set. Concerning the price point, Toshiba’s model is the only dealer/direct A4 small work team B&W MFP Another distinction for Toshiba’s e-STUDIO409S is the 50-sheet DADF, which is a notable feature, particularly at its low hardware price. Canon, HP, and Sharp offer standard DADFs within their A4 small work team line-ups, but the corresponding hardware prices are higher and coupled with a more robust general feature set. While cartridge MSRP remains unreleased at this time, Toshiba’s 20k page replacement toner is expected to contribute to a competitive total cost of ownership that will appeal to budget-conscious users. Toshiba’s running costs may be similar to Canon’s imageRUNNER 1643i series, HP’s LaserJet Managed MFP E52645 series, and the Lexmark XM1242 MFP, which collectively provide black toner replacement yields that are between 20k and 23k.

Overall, Toshiba’s new model will enable the vendor and its authorized dealers to capture new demand at the lower end of the market among companies that require a smaller-sized A4 B&W device. Looking ahead, Toshiba is expected to target a wide range of customers across verticals specifically small workgroups (work teams) and companies looking to equip remote employees with home office technology.

To find out more about the Toshiba 42ppm e-STUDIO409S A4 B&W multi-function printer, get in touch with our team.

Difference Between a Printer Copier and MFP
May 18, 2022

Benefits of Partnering with a Shredding Company
May 18, 2022

Best Copiers to Rent for a Large Business on a Budget
May 18, 2022
Contact Us

Request a Call Back

Go to Top
We use cookies on our website to give you the most relevant experience by remembering your preferences and repeat visits. By clicking “Accept All”, you consent to the use of ALL the cookies. However, you may visit "Cookie Settings" to provide a controlled consent.
Cookie SettingsAccept All
Manage consent

This website uses cookies to improve your experience while you navigate through the website. Out of these, the cookies that are categorized as necessary are stored on your browser as they are essential for the working of basic functionalities of the website. We also use third-party cookies that help us analyze and understand how you use this website. These cookies will be stored in your browser only with your consent. You also have the option to opt-out of these cookies. But opting out of some of these cookies may affect your browsing experience.
Necessary Always Enabled
Necessary cookies are absolutely essential for the website to function properly. These cookies ensure basic functionalities and security features of the website, anonymously.
Functional
Functional cookies help to perform certain functionalities like sharing the content of the website on social media platforms, collect feedbacks, and other third-party features.
Performance
Performance cookies are used to understand and analyze the key performance indexes of the website which helps in delivering a better user experience for the visitors.
Analytics
Analytical cookies are used to understand how visitors interact with the website. These cookies help provide information on metrics the number of visitors, bounce rate, traffic source, etc.
Advertisement
Advertisement cookies are used to provide visitors with relevant ads and marketing campaigns. These cookies track visitors across websites and collect information to provide customized ads.
Others
Other uncategorized cookies are those that are being analyzed and have not been classified into a category as yet.
SAVE & ACCEPT
Make an Enquiry